“Brrrrr…” Freezing cold weather in Darjeeling in November. The Sun setting down as early as 5 PM in the evening. Rising across the Kanchenjunga peak and it’s horizon early in the morning, as early as 5 AM on the North Eastern Himalayan terrains! Yes, that was the time when Darjeeling was to be visited… And thankfully I was there at that very moment. I went there to trek the Sandakphu-Gurdum ranges and hopefully climb the mountains at the highest point of Sandakphu to see the Kanchenjunga & Mt. Everest up close and personal. Before we started our trek, we had a couple of days where we could acclimatize ourselves to the conditions and get to know Darjeeling a little more…

I took that opportunity to tour the city in search of interesting people, stories and certainly take some really great shots of the local culture around. As soon as I entered Darjeeling, everything about it fascinated me. Looking at the small town like manifestation of the entire location felt very close to home and gave a significant amount of warmth in itself. Everywhere I looked around I could visualize the beauty of the North East India that started here. I was told that girls and women in Darjeeling are truly beautiful, but this was the first time I got to see it and indeed, “Seeing is believing.”  Besides their beauty and aura, every girl and even guys had a strong, bold empowering style to themselves. They definitely knew what fashion was and could teach a thing or two to Bombayites like me.

Having said that, another aspect of Darjeeling I really admired the most, was that one could, at any point in time always keep an eye on the Kanchenjunga peak. It’s magnificence bore a stark resemblance to divine feeling of spiritual transcendence. And why not, Kanchenjunga is also called as the Sleeping Buddha, for it resembles HIM sleeping and his features show across. Look carefully and you will see the head, prosperous tummy & feet. 🙂

So the first day we whiled around the town, checked out the local places, shopped for some warm clothes, hung out at a local pub ‘Joey’s’ mostly I was with Mr. Shashi Patel, an American Indian from the Bay Area whom I met while strolling around the railway station at Sunset. So after hanging out with him and talking about travel and my experiences across India, we headed back to our respective hotels. Our plan the next day was to catch the view of the sunrise early in the morning at Tiger Hills.

While returning back we decided to stop by at this local place and check out some interesting items that we could purchase. He wanted to take some gifts back home. Something easy to carry and not too much on his pocket as he wanted lots of gifts for all his friends.

Tucking away her earnings…

We began strolling across and started to scan the place for interesting items. There were caps, clothes, strolls, scarves, glares, Darjeeling special Tea and a lot of other interesting items. But what really caught my eye was this old woman, who was pretty occupied within herself. She looked very busy and had a certain aura about herself. She was very bold and mostly her voice was very prominent. Certainly caught my eyes and ears. But that is not what made me go check out what she was selling… I looked at her, she was around 60-65 years old, had sharp features… Her eyes were certainly a lot bigger than others around. She not only spoke in Hindi but also had a sharp way of speaking in English as well. More importantly, she was out there as if she meant business.

We looked at what she was selling and did find it pretty interesting. They were small purses, caps, scarves and strolls… All of them handwoven with a special pattern that they had about themselves. They were excellent pieces of handicraft. Certainly intrigued me and I wanted to buy a few purses for some of my friends and my mom.

So, I decided to take a look at the items on sale and thought of which ones to pick. Mr. Patel also was interested and we told ourselves, let’s buy 10 of these purses together. She will give us a good deal if we take in bulk.

I asked her “How much does this purse cost?”

“Rs. 30,” she replied, while hastily giving money to her previous customers and sorting out her own sets of the products that were bit off the carpet she kept them on.

“They’ll cost as much as they cost now…”

“That doesn’t matter, the cost doesn’t change…” she replied calmly…

We both looked at each other and smiled. Looks like she needed some more incentive probably for us to get a better deal. So my newly found friend picked up some other products and asked for their price… Surprisingly they also were priced at Rs. 30. Except a couple of the items all of them were priced at that amount.

We asked her again, but she wouldn’t budge.

“I won’t change the price for you, If you want to buy you can buy… It’ll sell anyways, if not today, tomorrow. I’ve been making these purses on my own for 30 years… and never have I gone without selling all off every year. Besides, we don’t work off season cause of the cold.” She smiled at us mischievously. 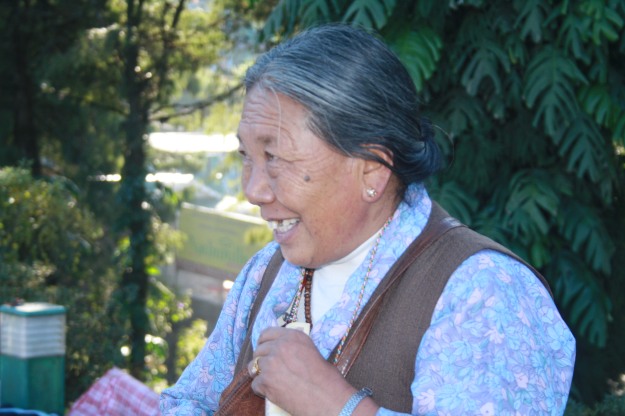 While we realized, our deal won’t happen, we both admired her headstrong, entrepreneurial sense of ownership. She was a true businesswoman of sorts and I can’t think but admire her perseverance that at the age of 61, which we found out later in our conversation, she had this energy and level headed and amazing attitude about herself. We got to know that she migrated from Tibet in 1972 and has been making and selling these works of art. She is alone and lives in the city below. Every morning she wakes up at 4 AM, finishes her chores and sets off to come here, by walk with her backpack of items to sell. Once people who come down after viewing the sunrise to shop at her place and more often than not, her inventory gets exhausted by 9.30 AM. If not, she takes the remaining ones back home and then goes to a tea shop that she runs outside her house…

Reminded me of ‘The Steve Jobs’, I was reading that book on the trip, but clearly I could identify her sense of feel and value for quality and niche business value add. Don’t go by the price, but her stubborn yet confident decision to not back out of the price for a product that was of true quality. Something that many wouldn’t hesitate to pay ten or fifteen times the amount if it was a designer product, much like this one and in fact made out of the same material, only added with an elitist price tag… Salute to the Tibetian Tigress! For the beautiful work of art, Thuk Ji Chhe (Thank You in Tibet)

What do you think about her attitude?