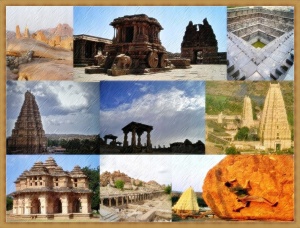 Now that is a place that I wanted to visit all this time. One of my very good friends… A friend with vested interests in ‘Archaeology’ would kill me for going alone here. But hey, the travel spree that I’m on. No one can blame me. This spot was the spot I chose for this weekend’s travel on the spur of the moment low budget trip.

Why? For all these reasons… But before that a bit about Hampi.

Hampi is a village in northern Karnataka state, India. Located within the ruins of Vijayanagara, Hampi is the former capital of the Vijayanagara Empire. Predating the city of Vijayanagara, it continues to be an important religious centre, housing theVirupaksha Temple, as well as several other monuments belonging to the old city.

As the village is at the original centre of Vijayanagara, it is sometimes confused with the ruined city itself. The ruins are a UNESCO World Heritage Site, listed as the Group of Monuments at Hampi.

So anyways why is this place famous? It’s because of the famous ruins of the old Vijaynagar believed to be a very religious place and one of the best archealogical escapades that our country has to offer. If you study Arts and want to do Archeaology, a place must see.

Places that are really worth Visiting and I’m gonna visit:

Vittala Temple: As the epicenter of Hampi’s attractions, Vittala Temple is the most extravagant architectural showpiece of Hampi. No amount of words can explain this spectacle. The temple is built in the form of a sprawling campus with compound wall and gateway towers. There are many halls, pavilions and temples located inside this campus. Vittala, after whom the temple is known, is a form of lord Vishnu. This aspect of Vishnu was worshiped in this part of the country as their cult deity by the cattle herds.

The temple was originally built in the 15th century AD. Many successive kings have enhanced the temple campus during their regimes to the present form. Yon can even see the remains of a township called Vittalapura that existed around this temple complex. The highlight of Vittala temple is its impressive pillared halls and the stone chariot. The halls are carved with an overwhelming array of sculptures on the giant granite pillars. The stone chariot located inside the campus is almost an iconic structure of Hampi.

One typically accesses the campus through the eastern entrance tower, next to which the ticket counter is located. On entering through this massive tower, the first thing draws your attention would be a series of compact platforms along the central axis of the campus. At the end of these platforms stands the Stone Chariot. This is in fact a shrine built in the form of a temple chariot. An image of Garuda (the eagle god) was originally enshrined within its sanctum. Garuda, according to the Hindu mythology, is the vehicle of lord Vishnu. Thus the Garuda shrine facing the temple’s sanctum is symbolic.

Virupaksha Temple: Virupaksha temple is the oldest and the principal temple in Hampi.  This temple is located on the south bank of the river Tungabadra, just next to where the local bus drops you. This area in general has been an important pilgrimage centre for the worshipers of lord Shiva. Virupaksha temple is equally sort after by the tourists and pilgrims. The annual festivals attract huge crowds of both the types.

The very origin of Hampi’s history as a sacred place revolves around the myths associated with this temple.  It believed that this temple has been functioning uninterruptedly ever since its inception in the 7th century AD. That makes this one of the oldest functioning temples in India.

Main entrance tower of Virupaksha Temple, view from inside the temple campus

The original worship place was only a few separate humble shrines (believed to be as old as 7th century) housing the image of the god and the goddesses. Over the centuries the temple gradually expanded into a sprawling complex with many sub shrines, pillared halls, flag posts, lamp posts, towered gateways and even a large temple kitchen. You access the temple’s main entrance tower through the chariot street in front now popularly called the Hampi Bazaar.

Bouldering In Hampi: Whether you are amateur boulderer or a veteran looking for new problems off the beaten routes, Hampi will not fail to satisfy your hunch. In Hampi you can spend a lifetime do bouldering and still left with many problems yet to be attempted. I’m no bouldering expert, but I could see at Hampi enthusiastic folks attempting problems like there is no tomorrow.

For long Hampi has been in the list of those places secretly shared among the old hand boulderers. Not anymore, especially after the 2003 sensational climbing movie “Pilgrimage” featuring Chris Sharma with his friends Katie Brown and Nate Gold.

This movie shot by the renowned climbing movie maker Josh Lowell generated special interest among the bouldering fans across the world.

Along with some serious bouldering actions, the movie succeeded in capturing the very essence of the holy nature of Hampi. Therefore the name Pilgrimage! A beeline of climbers lugging their crash pad to the boulder-strewn Hampi was the result.

The purists among the boulderers may not to like to see it, but Hampi has a large number of giant boulders that is split apart vertically. As a boulderer sometimes these create campus board like problems for you. Overall these are the places of Interest!

For Mobile while you are on the go : m.hampi.in